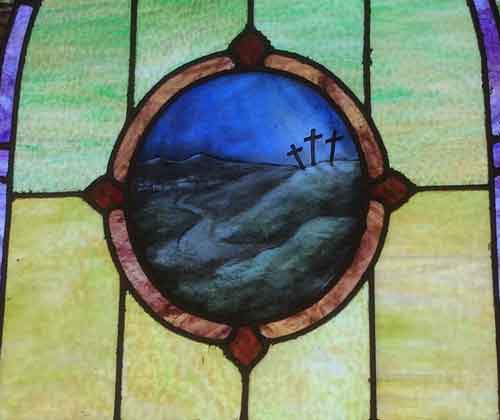 Pastor Steve Bauer
Who Will Take Jesus Down? (Good Friday)

Who Will Take Jesus Down?

Who gets to set the agenda? I never was one to watch presidential debates. But, years ago, I watched a presidential debate because, I was told, that was the responsible, grown-up course to follow. And what surprised me right away is how the course of the entire conversation could be guided if not even dominated by the person who got to ask the questions. The one who asked the questions was the one who got to set the agenda. Tonight, on this night of darkness we spend more time in Mark’s gospel. And so we ask the question: who will set the agenda? In Mark 15, we read: “29 Those who passed by were yelling insults at him, shaking their heads, and saying, “Ha! The one who would destroy the temple and rebuild it in three days, 30 save yourself by coming down from the cross!” 31 In the same way, the chief priests with the scribes were mocking him among themselves and saying, “He saved others, but he cannot save himself! 32 Let the Messiah, the King of Israel, come down now from the cross, so that we may see and believe.” Even those who were crucified with him taunted him.” (Mark 15:29–32 CSB17)

Notice how these words start out. People pass by and say, “come down from the cross.” Then the Jewish leaders follow up and with scorn and derision, say, “come down from the cross.” And with those questions, they set the agenda for all the words which follow. Who will take Jesus down from the cross? And if the Jewish leaders ask the question, what follows after this makes the question all that much more important. We read: “33 When it was noon, darkness came over the whole land until three in the afternoon. 34 And at three Jesus cried out with a loud voice, “Eloi, Eloi, lemá sabachtháni?” which is translated, “My God, my God, why have you abandoned me?”” (Mark 15:33–34 CSB17)

Who will take Jesus down? Who will rescue him from this torment and torture there on the cross? With such clear please and cries of pain, Jesus lets us know that his Father abandoned him. So, if the question is “who will take Jesus down,” the answer is definitely not God above. So if Jesus cannot seem to take himself down as the Jewish leaders invite, and if God above cannot take him down, who will take him down? Let us read some more: “35 When some of those standing there heard this, they said, “See, he’s calling for Elijah.” 36 Someone ran and filled a sponge with sour wine, fixed it on a stick, offered him a drink, and said, “Let’s see if Elijah comes to take him down.”” (Mark 15:35–36 CSB17)

If Jesus cannot take himself down and God will not take Jesus down, then who will take him down? The crowd concludes that maybe Elijah will. These words here that the crowds speaks are probably the most incomprehensible and non-sensical words in the entire bible. They make no sense. Earlier Jesus had made the point that John the Baptizer was the Elijah that was to come.1 They were all there waiting for Elijah to come. But Elijah already came. And they missed it.

And we find the same pattern among us today. Years ago, I used to belong to a gym. And there were two elderly gentlemen on the other side of the lockers. And they were talking about about lazy kids were now-days. And one of them said, “It’s like it says in the good book, God helps them who help themselves.’” Now, I wasn’t exactly dressed at that moment. So I didn’t address the situation. But I wanted to. I wanted to go around the corner and ask the guy, “So, just where does it say that in the bible?” God’s word never reached his head, so it never really reached his heart.

We too face this same temptation and trap. It is ever-so-tempting to not study God’s word. And there are consequences that follow and flow into our lives when we do not set aside time to study God’s word. First, we don’t care. Years ago I visited with a man who didn’t read God’s word when he was a younger man. But, when he retired and especially when he got sick and became a shut-in, he read God’s word. And he said to me, “Pastor, I hurt a whole lot more now then I used to.” That is what happens when we read and study God’s word. The Holy Spirit makes us care. He shapes our consciences so that we hurt, we mourn, we grieve over our sins. But the second consequence is just as bad. If God’s word does not reach our heads and then reach our hearts we end up caring about the wrong concerns. It is important to talk about children stealing their parents fire arms and then shooting people. It is important for us to talk about North Korea using nuclear arms against Japan. But neither of those is that important compared to what the crowds were forced to face there on the cross. For what good would it be to get rid of all fire ams and all nuclear arms and then, one by one, have each person die without a knowledge of the gravity of their sin and the sincerity flowing from their Savior? If God’s word does not reach our heads, it does not reach our hearts. Who will take Jesus down? In their stupidity, the people ask, “maybe Elijah.” But what happens next? We read: “37 Jesus let out a loud cry and breathed his last. 38 Then the curtain of the temple was torn in two from top to bottom. 39 When the centurion, who was standing opposite him, saw the way he breathed his last, he said, “Truly this man was the Son of God!”” (Mark 15:37–39 CSB17)

Who will take Jesus down? Not Jesus; not God above; not even Elijah. Who would take Jesus down? No one will take Jesus down. But when Jesus dies, because no one took Jesus down, the temple curtain was torn down. At the temple there was this massive curtain that divided the Jewish men from all the Gentiles. In fact, the Jewish Historian Josephus tells us that there were signs up that said that if you crossed over you took your life in your own hands. Imagine the sermon that preached: you cannot get to God if you are a Gentile. But then what happens? Jesus dies and the temple curtain is torn down. And this centurion is able to look up and over at the temple and conclude, “Now I can get to God. Now heaven is open to me.”

And the same is true for us. When we do not allow God’s word to reach our heads and then its meaning never gets to our hearts we show and prove that we do not belong with God. Instead, we belong separated from God in hell. But no one took Jesus down. He was tortured and in torment for me. My sins of caring more about studying hobbies and habits is put to death there on the cross. My sin of not caring or just as bad, caring about the wrong concerns—those sins are dealt with by Jesus’ death. And as a result, each of us can conclude right along with the centurion: “I now have open access to God and the heaven he has prepared for me.”

Who will take Jesus down? The crowd wonders whether Elijah will take Jesus down. Jesus dies and the temple curtain is torn down. But there’s one final detail to take care of in thes words: “40 There were also women watching from a distance. Among them were Mary Magdalene, Mary the mother of James the younger and of Joses, and Salome. 41 In Galilee these women followed him and took care of him. Many other women had come up with him to Jerusalem. 42 When it was already evening, because it was the day of preparation (that is, the day before the Sabbath), 43 Joseph of Arimathea, a prominent member of the Sanhedrin who was himself looking forward to the kingdom of God, came and boldly went to Pilate and asked for Jesus’s body. 44 Pilate was surprised that he was already dead. Summoning the centurion, he asked him whether he had already died. 45 When he found out from the centurion, he gave the corpse to Joseph. 46 After he bought some linen cloth, Joseph took him down and wrapped him in the linen. Then he laid him in a tomb cut out of the rock and rolled a stone against the entrance to the tomb.” (Mark 15:40–46 CSB17)

The women watch at a distance because they cannot take Jesus’ down. But then, amidst all the fear and cowardice of this day we read that word, “boldly.” With such boldness Joseph of Arimathea dares to ask Pilate for Jesus’ body. There is such urgency in these words. But there is also such confidence. For Joseph carefully cares for Jesus’ body knowing that his sins are paid for and that there will be proof that his sins are paid for when Jesus rises from the dead. And with such amazement and joy we find the answer to the question: who will take Jesus down? Not Jesus; not God above; not Elijah. No one takes him down. He dies there. And then after he dies, with boldness Joseph takes his body down to fulfill scripture and show his faith. Amen.