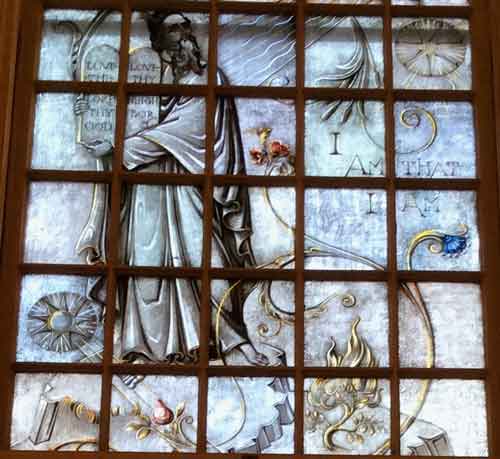 Pastor Steve Bauer
Who Do You Think You Are? (Lent 5)

Who Do You Think You Are?

How do you answer someone who disagrees with you? Actually, let’s make the question even more challenging: How do you answer someone when it’s as plain as day that the other person is wrong? In the Old Testament it says, “Do not answer a fool according to his folly, or you will be like him yourself.” (Proverbs 26:4 NIV) And what’s fascinating, is that in the very next verse, God’s word says, “Answer a fool according to his folly, or he will be wise in his own eyes.” (Proverbs 26:5 NIV) So which do you do? When someone is wrong, and you know it, do you correct that person, or not? Sometimes there is no way out. Sometimes God puts you in the situation where you have to correct that other person. And that’s the situation that we see Jesus in this morning. In John 8, we read: “46 Can any of you prove me guilty of sin? If I am telling the truth, why don’t you believe me? 47 Whoever belongs to God hears what God says. The reason you do not hear is that you do not belong to God.” 48 The Jews answered him, “Aren’t we right in saying that you are a Samaritan and demon-possessed?” 49 “I am not possessed by a demon,” said Jesus, “but I honor my Father and you dishonor me. 50 I am not seeking glory for myself; but there is one who seeks it, and he is the judge. 51 Very truly I tell you, whoever obeys my word will never see death.”” (John 8:46–51 NIV11-GKE)

In these words Jesus is at the very end of a long conversation with the Jewish Leaders in Jerusalem. And there’s no way around it. He, out of love for them, is going out of his way to correct them. But what is fascinating in these words is how he does this. At the end of the day, he wants them to know that he is their Savior from sin. So, first of all he needs to let them know that they are sinners. And so he tells them that whoever keeps his word will never see death. Now it’s very important for us to see where Jesus starts. Years ago I had a professor who said that when you are speaking to people about their sin and their Savior, what you should not do is tell them that they cannot get into heaven by themselves. No, instead, you should help them discover what it takes to get into heaven if they want to go alone. Let them know, he said, that if they want to get into heaven what they need to do is to never, ever say, think or take any selfish, sinful action towards anyone else. All you have to do is perfectly obey God…always…till your very last breath. For when you do this you let people know that if they want to jump over a bar to get into heaven, the bar is above the skies and way out of their reach. They cannot be perfect. That is what Jesus is doing here. He lets them know that if anyone of them is able to keep Jesus’ words perfectly and completely that person will never ever see death. These are words that are supposed to drive them to give up on their own ability to get to heaven by themselves. But these are also words that are supposed to show Christ’s great love for them.

All this is important for us to see. For when we see Jesus here we see someone who is so very often the opposite of who we are. Jesus reaches out and corrects these Jewish leaders who hated him when it would have been so much easier to simply ignore them. And by reflection and contrast it reminds us of the times we should have corrected those around us who were wrong—especially wrong about their conclusions about the bible. But instead of correcting them, we became embarrassed and ignored the problem. Or, on the opposite extreme, instead of ignoring the problem we corrected them like a hammar corrects a nail. Without love and without compassion we rejoiced at the opportunity to tell them when they were wrong. Well then, when Jesus reaches out to correct them, what is their response to him?: “52 At this they exclaimed, “Now we know that you are demon-possessed! Abraham died and so did the prophets, yet you say that whoever obeys your word will never taste death. 53 Are you greater than our father Abraham? He died, and so did the prophets. Who do you think you are?” 54 Jesus replied, “If I glorify myself, my glory means nothing. My Father, whom you claim as your God, is the one who glorifies me. 55 Though you do not know him, I know him. If I said I did not, I would be a liar like you, but I do know him and obey his word.” (John 8:52–55 NIV11-GKE)

Jesus is the only one. He is the only one who can keep God’s word.’ But notice here what Jesus says. Jesus is the only one who can carry God’s name.’ In these words we find two amazing and shocking statements. First, Abraham saw Jesus’ day. In a very wondrous way Jesus lets us know that he was there. He was there at the beginning and creation of the world. And he has been there every day up until he spoke these words. Jesus is the eternal Son of the Father. And the Jews pick up on how shocking this statement was. And they ask him in a disgusted and condescending way, “You saw Abraham?”1 From there then, Jesus says a second, even more shocking statement: “Before Abraham existed, I Am.” Now, there’s more going on in these words than we might pick up on at first glance. These words take us back to Exodus 3 where Moses asks God what his name is. And in a shocking and surprising turn of events, God tells him. He says, “I am that which I am.”2(Exodus 3:14 BHS-T)}} Then he tells Moses, “I Am has sent me.”3(Exodus 3:14 BHS-T)}} So when Jesus says, “Before Abraham existed, I Am”, the Jews perfectly understood what he was doing and what he was saying. He was saying that he was a human who could carry God’s true and divine name. And we know this is exactly how they understood this. For they picked up stones to stone him. That was a punishment for blasphemy.

When they asked him the question, “who do you think you are?”, out of love for them, he gave them two answers. Jesus is the only only one who can keep God’s word. And Jesus is the only one who can carry God’s name. And that is a fact that we ponder this morning. For there have been times where we have not corrected people in a patient and caring way. But out of love for us Jesus gives us the opportunity to correct people. And the way we can do that in this context, in these words, is to correct and clarify who Jesus is. When our co-worker stubs his or her toe and says, “Jesus Christ”, with patience and care you can say, “I know those words slipped out because you were in pain, but those are words worthy of divine dignity and worship.” And, even worse, when someone says, “Jesus Christ,” as a punchline to a joke or a curse, even more, with patience and love you can say, “Maybe you think that I will listen to you more when you use the name of God like that. But I am convinced that that is the name of the one true God. And on the last day he will send people to heaven and send others to hell. That is not a name you want to play games with.” And when the person says the same question the Jewish leaders speak here, “who do you think you are?”, you can respond by saying, “That’s not the real issue. The real issue is “who do you think Jesus is.”’” For Jesus is the only one. He is the only one who keeps God’s word. And he is the only one who carries God’s name. With this in mind, let us ever praise him for saving us from our sin. And let us ever worship him for who he is. Amen.