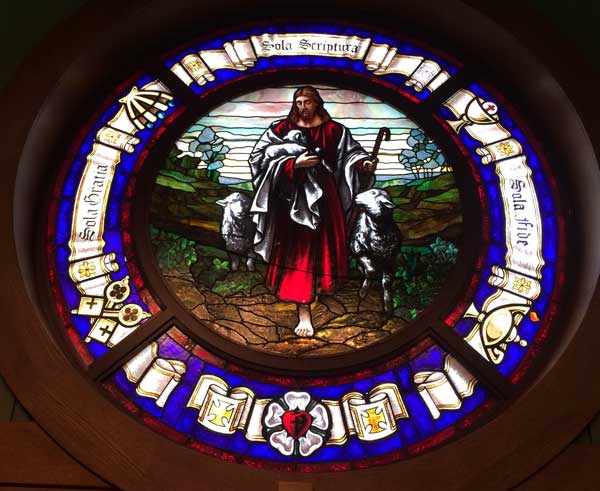 The Lord Is My Shepherd

If it weren’t so tragic, it might be humorous. In our gospel this morning Jesus tells us of shepherds who were really not good shepherds at all. When the wolf comes, what do the shepherds do? Do they stay and stand against the wolf? No, they run. It’s the sort of picture that you find in comedy movies and cartoons. And it would be funny if it weren’t so tragic. In God’s word this morning, in Psalm 23, King David tells us how the Lord is the opposite of that. He is good, kind, faithful and reliable. In the opening words of Psalm 23, we read: “0 A psalm of David. 1 The Lord is my shepherd, I lack nothing.” (Psalms 23:0–1 NIV11-GKE)

Notice the picture that David gives us. The shepherd leads the sheep down by the river where there is grass by the side of the river. And what happens? They are so calm, so at peace, that they lie down and rest there. But what do they not do? They do not eat. I grew up with sheep. And I can tell you that when we lead the sheep from one area to another area, they would stop eating and then, when we got to the other area, what would they start doing again? They would begin grazing yet again. Here the picture is that of sheep who are so at ease and so content, they don’t even bother to eat. They just rest beside the beautiful waters. The Lord is their shepherd. And so, they lack nothing.

And that picture drives us to ask ourselves a question: why don’t we act like that? We know that the Lord is our Shepherd. So why is it that we don’t have that peace and calmness that David speaks about here? You can see this in how different generations treat money. I have met more than one person who grew up in the depression era. They grew up in fear, wondering where their next meal would come from. So when they grew up, what did they do? They saved. And they did not throw out. And, when they died, you’d find cupbords and closets full of Reynold’s wrap. And yet, I’ve spoken to people in the generation younger than mine who are in the opposite category. When it comes to money, instead of saving it, they make it a point to spend it. Why? They are the generation that grew up and bought homes in the mid-2000’s. And in those years they found out that the money you put in homes can fall away and the money we put into Social Security can fly away. And so, instead of saving, they started spending. And in both of these groups, we ask a simple, but important question: why did they do this? The answer is not out there. The answer is in here—in our hearts. Each of us has a sinful nature that refuses to trust that the Lord is our Shepherd, and because he is our Shepherd we will lack nothing. So what does the Lord do with our untrusting hearts? We read: “he refreshes my soul. He guides me along the right paths for his name’s sake.” (Psalms 23:3 NIV11-GKE)

The Lord guides us in paths of righteousness. Righteousness the word for perfection and holiness. And here in this Easter season we have every reason to speak about this righteousness. For there on the cross on Good Friday our hearts that want to save too much or spend too much are covered by Jesus’ righteousness. When we were unwilling and unable to depend on our Lord, Jesus depended on his Father completely in our place.

And that fact fills us with peace and contentment. For faithless and careless shepherds are not over us. Instead, the \textsc{Lord is our shepherd}. And because of that we lack nothing. But these words continue: “Even though I walk through the darkest valley, I will fear no evil, for you are with me; your rod and your staff, they comfort me.” (Psalms 23:4 NIV11-GKE)

The Lord is my shepherd. Because of this I will lack nothing. But notice the point that David makes in these words. Because the Lord is my shepherd, I will also fear nothing. There are consequences to sin. As we read in the New Testament: “wages of sin is death” (Romans 6:23 NIV11-GKE). And David preaches to us an amazing truth. Because the Lord is our Shepherd, we do not need to fear death. That consequence of our sin is paid for and dealt with. But notice where David goes to in these words after this: “5 You prepare a table before me in the presence of my enemies. You anoint my head with oil; my cup overflows. 6 Surely your goodness and love will follow me all the days of my life, and I will dwell in the house of the Lord forever.” (Psalms 23:5–6 NIV11-GKE)

David makes the clear and important point that God’s goodness and kindness will be with us all the days of our life—not just on the day of our death. And that is the amazing fact that David preaches to us during this Easter time. Jesus rose from the dead. If he dealt with that consequence of our sin, won’t he then be there to deal with the consequences of our sin, as David says here, “all the days of our life?”

And so, for example, the Christian young man, completely underestimates how much time it would take to study for a test. It’s 2 in the morning and he still is not ready for the test the next morning. So, he takes the tragic step of deciding to cheat on the test. The next morning he gets caught. Who will be there to help him with the consequence of that sin—not on his last day, when he dies—but on that day that he cheats? Who will be there for the young woman who is not invited to a party along with all the rest of her friends. And so, she spreads a horrible rumor about the other girl who didn’t invite her to the party—and then gets caught? When she sees her sin and repents, who will save her from the consequence of that sin? Yes, Jesus will rescue these Christians from the consequence of sin on their last day—death itself. But who will save them from the consequence of their sin today? Who will save them from their well-earned status of “cheater” and “gossiper?”

What would you say to the young Christian who might cheat or gossip? What do you say to them after they have confessed their sin? What does David say? David says, “The Lord is my Shepherd. I will fear nothing.” And David knew what it was to live with the consequences of his own sin. There was that time in his own life when he had idle hands and wandering eyes, when he committed adultery with Bathsheba. But he confessed his sin. And not only did the Lord deal with his sin by forgiving it, but he also dealt with the consequence of his sin by dealing with it. It might sound strange. But in the years after that sin David was closer to the Lord rather than farther away. For he could see how the Lord not only forgave his sin, but also dealt with the consequence of his sin and used it for good to discipline him and strengthen his faith.

The Lord is David’s shepherd. And If you were to speak to the cheating and gossiping teenager who came to you in repentance to ask for forgiveness, that is what you will say to that person. You will teach them to say, “The Lord is my shepherd; I will fear nothing.” And in your soul and in your heart you know how true these words are. For the Lord is your shepherd. How many times in your own life has the Lord not only forgiven your sin, but then also, kindly and graciously, dealt with the consequence of your sin.

It might be amusing when the wolf comes and the hired-hand runs away. But in our own lives, the very thought can be terrifying. How thankful we are that each of us can say, “The Lord is my Shepherd.” Because of this, I lack nothing. Because of this I fear nothing. Amen.