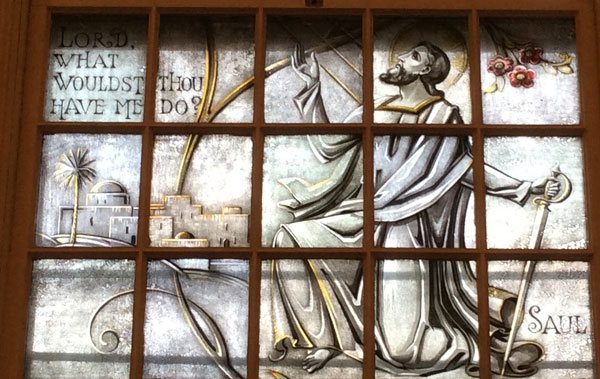 The Enemies of Christ Need the Gospel

Nobody chooses ugly. A few months ago, an old high school friend of mine posted pictures of herself on Facebook. They were before and after pictures. In one picture she had good lighting and make up on. And in the other picture she did not have make up on. And she went on to confess that she had always had problems with her skin. And she became very good with make up for one simple reason: nobody chooses the ugly girl. It’s true, isn’t it? We are drawn to that which is beautiful and that which is best. But it’s not that way with our Lord. Martin Luther put it this way: “God’s love does not find, but creates, that which is pleasing to it. Human love comes into being through that which is pleasing to it.””1 This morning we have an amazing example of this. It would be hard to find a more ugly example of a human being than Saul. In Acts 9, we read: “1 Meanwhile, Saul was still breathing out murderous threats against the Lord’s disciples. He went to the high priest 2 and asked him for letters to the synagogues in Damascus, so that if he found any there who belonged to the Way, whether men or women, he might take them as prisoners to Jerusalem. 3 As he neared Damascus on his journey, suddenly a light from heaven flashed around him. 4 He fell to the ground and heard a voice say to him, “Saul, Saul, why do you persecute me?” 5 “Who are you, Lord?” Saul asked. “I am Jesus, whom you are persecuting,” he replied. 6 “Now get up and go into the city, and you will be told what you must do.” 7 The men traveling with Saul stood there speechless; they heard the sound but did not see anyone. 8 Saul got up from the ground, but when he opened his eyes he could see nothing. So they led him by the hand into Damascus. 9 For three days he was blind, and did not eat or drink anything.” (Acts 9:1–9 NIV11-GKE)

It doesn’t get any uglier than what we read here in these words. In the book of Acts, three times we hear of what Paul’s life was like before he was a Christian. And every time there are more details which make us see how ugly Saul was. Here in these words, he hates Jesus so much that he is willing to get official letters from the high priest in Jerusalem and travel outside of Israel to Damascus so that he can arrest both men and women and put them to death in Jerusalem. There is no other word you can use for this than, “ugly.” And yet, Jesus chooses Saul. And he even appears to him on the road to Damascus. And he does this for one simple and important reason: The enemies of Christ need the gospel. Jesus wants all people to be saved. So Jesus reaches out to this man who is filled with such ugliness and preaches a very powerful message, “Saul, Saul, why are you hunting me down?”2 Out of love for him, he shows Saul his sin. But what happens next is just as interesting: “10 In Damascus there was a disciple named Ananias. The Lord called to him in a vision, “Ananias!” “Yes, Lord,” he answered. 11 The Lord told him, “Go to the house of Judas on Straight Street and ask for a man from Tarsus named Saul, for he is praying. 12 In a vision he has seen a man named Ananias come and place his hands on him to restore his sight.” 13 “Lord,” Ananias answered, “I have heard many reports about this man and all the harm he has done to your holy people in Jerusalem. 14 And he has come here with authority from the chief priests to arrest all who call on your name.” 15 But the Lord said to Ananias, “Go! This man is my chosen instrument to proclaim my name to the Gentiles and their kings and to the people of Israel. 16 I will show him how much he must suffer for my name.”” (Acts 9:10–16 NIV11-GKE)

The enemies of Christ need the gospel. But notice what we see here. Jesus wants us to share the gospel with them. And here in these words we see what that looks like. Jesus tells this believer, Ananias to share the gospel with Saul. And Ananias asks Jesus if that is really a good idea. Ananias is scared of Saul. The enemies of Christ need to hear the gospel. And he has given that task to his church. But each of us can easily put ourselves in the shoes of Ananias. It is so easy to not share the gospel with unbelievers. It might be like Ananias that we are afraid of them and the harm they can do. It might be that we are angry at them. I remember when I was in high school and I had a Biology teacher who was zealous evolutionist. Day after day I had to hear him say, “Millions of years ago…” So I grew to hate him. Instead of praying that Jesus would change his heart to the truth, I prayed that God would put an end to him. It is easy to not share the gospel because it is so easy to hate those who hate Jesus. Or, we might not want to share the gospel with the enemies of Christ because they might actually be converted. And when they are converted, they might actually join our church. And we might actually have a person with a pierced nose and snake tattoos down the length of his body in our church. We might be embarrassed that a person who did not grow up in church might not instantly act as if he grew up in the church. We might hesitate. But Ananias went to Saul. And here’s what happened: “17 Then Ananias went to the house and entered it. Placing his hands on Saul, he said, “Brother Saul, the Lord—Jesus, who appeared to you on the road as you were coming here—has sent me so that you may see again and be filled with the Holy Spirit.” 18 Immediately, something like scales fell from Saul’s eyes, and he could see again. He got up and was baptized, 19 and after taking some food, he regained his strength.” (Acts 9:17–19 NIV11-GKE)

Ananias goes to Saul. And the first action Ananias takes is to call this ugly man who hunted down Christians, “brother.”3 He gives him a name and a title that Saul did not deserve. He tells Saul that he was about to give him an amazing gift. He was about to give him the gift of the Holy Spirit. And then after giving him this promise, he fulfills that promise by baptizing him. And in those waters of baptism he brings forgiveness to him and washes away all of his sin.

And so, my brothers and sisters, this leads us to the question, why. Why did Ananias do this? First of all, no doubt, he recognized that there was once a time when he was an enemy of Christ. And each of us recognizes the same. Everyone of us has been and lived as an enemy of Christ. But God has washed away our sins in those waters of baptism. Second, As each of us sees that we are forgiven and how much we are forgiven, there is this amazing and natural joy at wanting others to have that same forgiveness. And that’s the joy that Ananias had. By God’s Holy Spirit, it wasn’t just Jesus who could say that the enemies of Christ needed to hear the gospel. It was Ananias too. And with joy in our hearts we too say the same today.