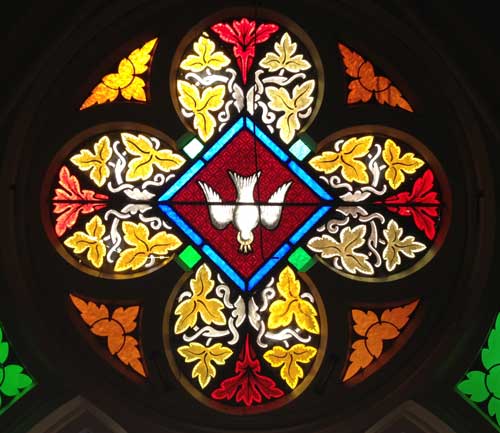 What Does This Mean

There’s something you don’t see everyday. Every day I travel to the church along Bavaria road. And, over the weeks, there are certain sights I have gotten used to seeing. I’ve gotten used to seeing people walking their dogs, people biking, and people jogging. One day though, I was on my way to church, and there on the sidewalk was a guy riding a unicycle. It was such a jarring, shocking sight that I had to slow down and have a look. Finally then, the only conclusion I could reach was, “Well, there’s something you don’t see everyday.” This morning, in these words here in Acts 2 we very quickly arrive at the same conclusion. We read: “1 When the day of Pentecost had arrived, they were all together in one place. 2 Suddenly a sound like that of a violent rushing wind came from heaven, and it filled the whole house where they were staying. 3 They saw tongues like flames of fire that separated and rested on each one of them. 4 Then they were all filled with the Holy Spirit and began to speak in different tongues, as the Spirit enabled them. 5 Now there were Jews staying in Jerusalem, devout people from every nation under heaven.” (Acts 2:1–5 CSB17)

Every year it was commanded in God’s word that every male present himself to the Lord at the temple three times a year. On of those holy days was the feast of unleavened bread. And so, Jerusalem mushroomed and ballooned into a place where there were hundreds of thousands of men. And I deliberately mention the word, ‘men’ because it was the men that God’s word commanded to present themselves at the temple. And they weren’t just men. They were devout men.1 You don’t travel all the way across the Mediterranean Sea because you don’t care. These were devout men who knew their Lord and they knew their bible.

But what did these devout men see? They saw flames of fire resting on the heads of the apostles. They saw the apostles speaking in languages that they knew. So that’s what they saw. But what then did they say? “6 When this sound occurred, a crowd came together and was confused because each one heard them speaking in his own language. 7 They were astounded and amazed, saying, “Look, aren’t all these who are speaking Galileans? 8 How is it that each of us can hear them in our own native language? 9 Parthians, Medes, Elamites; those who live in Mesopotamia, in Judea and Cappadocia, Pontus and Asia, 10 Phrygia and Pamphylia, Egypt and the parts of Libya near Cyrene; visitors from Rome (both Jews and converts), 11 Cretans and Arabs—we hear them declaring the magnificent acts of God in our own tongues.” 12 They were all astounded and perplexed, saying to one another, “What does this mean?” 13 But some sneered and said, “They’re drunk on new wine.”” (Acts 2:6–13 CSB17)

They see fire on the apostle’s heads. They see the apostles speaking in their own dialects. So then, what do they say? “what does this mean?” Peter then stands up and lifts up his voice. And first he tells them what all of this does not mean: “14 Peter stood up with the Eleven, raised his voice, and proclaimed to them: “Fellow Jews and all you residents of Jerusalem, let me explain this to you and pay attention to my words. 15 For these people are not drunk, as you suppose, since it’s only nine in the morning.” (Acts 2:14–15 CSB17)

The flames on their heads and the dialects coming out of their mouths did not mean that they were drunk. Now here is where we need to pause for a minute. What kind of men were these? These were devout men. These were men who learned, cared for and studied God’s word. And without knowing it they ended up despising the Holy Spirit fulfilling God’s word. That was their sin. But we too sin when it comes to the question, “what does this mean?” One of the huge temptations we face is to make the one-time event of Pentecost into an everyday event. It is ever-so tempting to say to ourselves, “I want proof that I’m a Christian inside of myself.” We can say that we can proof that we are Christians by what we say or by what we do. And indeed, we are not alone. Sad to say, there are entire church bodies out there, who if they are asked the question, “how do you know that you are a Christian” they have an answer: They do what Christians do. They conclude that they are Christians because they have earned Jesus with their hands—they have done good works that everybody can see. Or they have earned Jesus with their hearts—they have decided to become Christians. And when they made that decision they felt different. Or even worse, there are those who conclude that they are Christians because of what comes out of their tongues. They can speak in unknown languages.

But what’s the problem? The problem is that both that these were known languages, not unknown one. And the other problem is that this was a one-time event. Or to put it differently, For all those people who say that they have proof that they are Christians because they babble in weird, unknown languages, how many of them can make real, true fire rest on their heads whenever they want? But we too can fall into the same trap and temptation—every time we want to find proof for our faith inside of us, by what we say or do.

So Peter gives a “not” answer. This does not mean. But then he tells us what these signs did mean: “16 On the contrary, this is what was spoken through the prophet Joel: 17 And it will be in the last days, says God, that I will pour out my Spirit on all people; then your sons and your daughters will prophesy, your young men will see visions, and your old men will dream dreams. 18 I will even pour out my Spirit on my servants in those days, both men and women and they will prophesy. 19 I will display wonders in the heaven above and signs on the earth below: blood and fire and a cloud of smoke. 20 The sun will be turned to darkness and the moon to blood before the great and glorious day of the Lord comes. 21 Then everyone who calls on the name of the Lord will be saved.” (Acts 2:16–21 CSB17)

What does this mean? The Holy Spirit provides a one-time event to prove an every-day fact. The one-time event is the flames of fire and the many known languages. And the everyday fact is that whoever and whenever a person calls on the name of the Lord, that person will be saved. Look at the amazing work the Holy Spirit does. First, because we could not know God, he reveals God. Because we could not choose God, the Holy Spirit chooses us. Because we could not come to God, the Holy Spirit comes to us. He gives us this amazing gift of faith. Second, he brings salvation to us. Jesus died for our sins. Jesus rose to prove that they are forgiven. And whenever anyone repents of his or her sin, again and again, the Lord forgives them. What good news that was for these devout men—that they forgot what they should have known, and they are forgiven. What great news that is for us—for those times we try to find proof that we are saved with proof inside of us instead of promises from God’s word on the outside. And not only is that sin forgiven. But again and again, throughout our lives we continue to call on him. And he forgives us and gives us even more promises of his forgiveness in his word.

Now there’s something you don’t see everyday. They saw fire resting on the apostle’s head. They saw them speaking in their own dialects. So they asked, “what does this mean?” And now you know the answer: The Holy Spirit provides a one-time event to prove an everyday truth. What is that truth? Everyone who calls on the name of the Lord will be saved. Since the Holy Spirit has done his wondrous work in you to give you faith, call on him. Every day we sin. So let us call on him to forgive us. And he will. Amen.