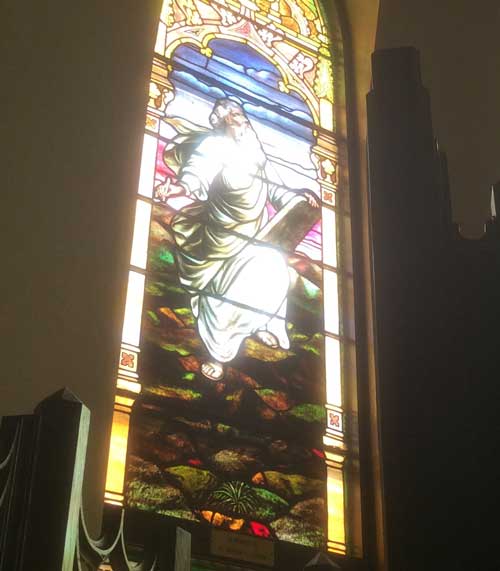 Pastor Steve Bauer
See What Does Not Change (Pentecost 2)

See What Does Not Change

He just doesn’t change. There was a newly-married couple. They had spent weeks walking through a pre-marriage counseling class with their pastor. And they weren’t even married for a year and they were back in counseling class. And the brand-new wife told the pastor those words: “He just doesn’t change.’” She had expected that when they got married he would change—he would be less of a slob, he would take her out to eat every week instead of coming home and hiding away from people. There were all these ways she thought that he would change. But, as the pastor told her, the problem is that marriage is not magic. Getting married doesn’t change who you are. You still have the same personalities as you had before you were married. In our lives there are areas that we expect to change. But they don’t. In God’s word this morning we learn the same lesson. And so, this morning, with the Holy Spirit’s invitation, see what does not change. In Luke 16, we read: “19 “There was a rich man who was dressed in purple and fine linen and lived in luxury every day. 20 At his gate was laid a beggar named Lazarus, covered with sores 21 and longing to eat what fell from the rich man’s table. Even the dogs came and licked his sores. 22 “The time came when the beggar died and the angels carried him to Abraham’s side. The rich man also died and was buried.” (Luke 16:19–22 NIV11-GKE)

Look in these words at what does not change. We see a man who is thrown at the gate of a rich man.1 He is perpetually poor. And he is perpetually alone and in bad health. The situation is so bad that dogs come over and lick his sores. After reading these words dozens of times over the years, I’m not sure if that’s good news or bad news. Are the stray dogs taking advantage and licking his wounds while he’s trying ot fall asleep. Or, as dogs seemingly only can, they are having pity on him and licking his sores because they care for them? Either way it shows how perpetually pitiful his life is.

Now, before we move on, it’s important to realize that there might come a time when, instead of talking about Lazarus, Jesus could speaking about you. You are not guaranteed to have the same health and wealth you have now. And, should the Lord see fit to give you a pitiful existence like Lazarus here, you might pray to have the situation change. And he might. But, in his own good wisdom, he might not. He might keep your status just the way it is.

I remember a lady in my last congregation who got polio as a child. And for eight decades she dealt with the effects of that polio. She had a hard life. And as time went on it didn’t get easier. And I remember visiting her in her closing years seeing her condition slowly get worse. And there was always the temptation that surely God could make her earthly status change. Surely he could change her health and make her life better here. But he didn’t. He didn’t for her. He didn’t for Lazarus here in this part of God’s word. And maybe, just maybe, there might come a time when the Lord brings hardship and tragedy into your life and then doesn’t change it.

You expect it to change, but it doesn’t. That’s the reality that these words bring to our attention. But there’s real good news that follows. Lazarus dies and is carried to Abraham’s arms. One of the most favorite and most beautiful names for believers in the Old Testament was to be called, a “child of Abraham.” And through faith in his Lord, that’s what Lazarus was. His earthly status did not change. But look at what else did not change: His heavenly status did not change. He was a child of Abraham. And when he died, he was carried to Abraham’s side.

Should there come a time when the Lord strips away your health and wealth, and then doesn’t change your earthly status, these are the words that will give you hope and confidence. For even if you earthly status doesn’t change, know that you heavenly status hasn’t changed either. Through the gift of faith, through the waters of baptism, you are a child of God. That does not change. But there is more in these words that does not change: “23 In Hades, where he was in torment, he looked up and saw Abraham far away, with Lazarus by his side. 24 So he called to him, ‘Father Abraham, have pity on me and send Lazarus to dip the tip of his finger in water and cool my tongue, because I am in agony in this fire.’” (Luke 16:23–24 NIV11-GKE)

Years ago, these words struck home for me, because I had this idea in my brain that when an unbeliever dies that person will immediately see how wrong they were. They will see the torment they are enduring in hell and they will see the joy that they are missing out on in heaven and then they will repent. Their attitude will change. But what these words show us so very clearly is that they do not change. These words so powerfully show us that the only place for unbelievers when they die is hell—not because God doesn’t want them, but because they hate the Lord and despise those who follow him. Look at the rich man. There he is, nothing has changed. He ordered Lazarus around before they died. And now, after he dies, he is still trying to order Lazarus around. See what doesn’t change. Unbelievers don’t change when they reach hell. But there’s more: “25 “But Abraham replied, ‘Son, remember that in your lifetime you received your good things, while Lazarus received bad things, but now he is comforted here and you are in agony. 26 And besides all this, between us and you a great chasm has been set in place, so that those who want to go from here to you cannot, nor can anyone cross over from there to us.’ 27 “He answered, ‘Then I beg you, father, send Lazarus to my family, 28 for I have five brothers. Let him warn them, so that they will not also come to this place of torment.’ 29 “Abraham replied, ‘They have Moses and the Prophets; let them listen to them.’ 30 “ ‘No, father Abraham,’ he said, ‘but if someone from the dead goes to them, they will repent.’ 31 “He said to him, ‘If they do not listen to Moses and the Prophets, they will not be convinced even if someone rises from the dead.’ ”” (Luke 16:25–31 NIV11-GKE)

Look at the rich man in these words. His uneasiness turns to urgency. Then his urgency turns to desperation. He is stuck in hell being tortured. And that will not change. But maybe, just maybe, it might change for his brothers who are still on this earth. So he tells Father Abraham to command Lazarus to warn them. And Father Abraham says, “no, they have Moses and the prophets.” That’s a figure of speech. Today we might hear, “the Whitehouse issued a statement.” Nobody really thinks that a bunch of white bricks did much of anything. Instead what came out of the Whitehouse was a statement. The same is true here. Moses and the prophets are long-dead and in heaven. But what came from them still speaks today. It’s a way of speaking about God’s word. Abraham says that the brothers have God’s word. But then notice what the ignorant, arrogant rich man says. If someone rises from the dead, they will repent. Notice then what Father Abraham says, “If they do not listen to Moses and the prophets, they will not be persuaded—not even if someone rises from the dead.”

Notice the pure and powerful point God makes to us today: God’s method for creating and preserving faith does not change. “Wows” and wonders are not what work. Instead God’s word is the method he uses to create faith and preserve it. These words mean so very much to me. For in my early years as a pastor I thought that what made a church healthy was activities. I concluded that many programs made a healthy church. Then, later on, a wiser pastor told me that programs and activities are only good if they connect people to God’s word. That was my great temptation: to conclude that God needed to change his method, that it wasn’t enough to just simply listen to Moses and the Prophets.

How foolish I was. But also, how gracious our Lord was. For he gave me the same gift he has given all generations of believers: his unchanging word. And he has given to you the same, my brothers and sisters in Christ. Light shows and fog machines don’t bring people to repentance. Moses and the prophets do. “Wows”, wonders and spectacles do not create faith in people’s hearts. Instead, God’s humble word does. And you have God’s word here at Faith. And for that reason, our congregation here at Faith is healthy. For where God connects people to Christ through his word, there will be healthy people and a healthy congregation. Amen.