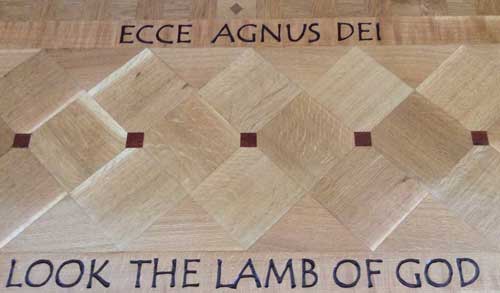 What does waste look like? Several weeks ago, I saw a mom walking down the street with her little boy. It was a busy street. And, as you might expect, there were objects that people dropped along the way on the ground. As they were walking down the road the boy stopped, reached down and picked up a piece of candy and ate it. The mom had to stop what she was doing and evaluate what was going on when there was a tug on her arm when the boy stopped. And before she could stop him the candy went into his mouth—dirt and all. This then began the lecture and lesson on why it was bad and wrong to put food that was on the ground in your mouth. And after a very clear, logical presentation of the facts, she said, “So don’t put candy that is on the ground into your mouth.” But I looked at his face. And every detail of his face cried out, “what a waste!” There’s this perfectly good piece of candy on the ground that was just going to waste if he didn’t eat it. And this makes us ask the question: what does waste look like? That’s the context we find ourselves in this morning. In Mark 14, we read: “3 While he was in Bethany at the house of Simon the leper, as he was reclining at the table, a woman came with an alabaster jar of very expensive perfume of pure nard. She broke the jar and poured it on his head. 4 But some were expressing indignation to one another: “Why has this perfume been wasted? 5 For this perfume might have been sold for more than three hundred denarii and given to the poor.” And they began to scold her.” (Mark 14:3–5 CSB17)

What a waste! That’s what all the people said. How much of a waste was this? Perfume—good perfume was expensive. This little jar of perfume was a little less then a year’s wages. Think of one bottle of perfume that was worth a year of your wages. And what does this woman do? She breaks it. With an item that precious you want to make it last and stretch it out. That’s not what this woman did. She broke the container and let the perfume flow over Jesus’ head and the fragrance fill the room. And so the people cry 0ut: “why this waste?” She could have stretched this perfume out. She could have sold it and given the money to the poor. But Jesus’ reaction to what she had done was totally different. They say, “look at the waste.” Jesus, instead, has us look at this woman: “6 Jesus replied, “Leave her alone. Why are you bothering her? She has done a noble thing for me. 7 You always have the poor with you, and you can do what is good for them whenever you want, but you do not always have me. 8 She has done what she could; she has anointed my body in advance for burial. 9 Truly I tell you, wherever the gospel is proclaimed in the whole world, what she has done will also be told in memory of her.”” (Mark 14:6–9 CSB17)

The first detail that Jesus tells us about this woman is that what she as done was noble and beautiful.1 What she did was noble and beautiful for two reasons: first, they would always be able to worship Jesus by helping out the poor, but they wouldn’t always have Jesus around, face to face, as he was at that time. Second, What she was doing was driven by why she was doing this. She was pouring perfume over his head to prepare for his burial.2 she was pouring perfume over his head to show that she understood what all the others in this room didn’t, that Jesus was going to die. The fact that Jesus was going to die drove her to consider many other details before she walked into that room with that jar of perfume. First, she considered her sin, how real and true her sin was. Second, she saw her own inability to pay for her sins. Third, she saw that, in order to pay for her sin, Jesus could not just dump a large pot of money into the temple treasury to pay for her sin. Her sin was so bad that the only price that could pay for her sin was the death of the sinless Son of God. All of that then drove her to ask the question: why this waste? But she did not ask this question in her soul about the perfume. No, instead she asked this question about herself. What a waste it would be to pay with your own life to redeem a person who would sin after you paid for her life just as much as before. And yet that’s exactly what Jesus did for her.

My dear friends in Christ, look at this woman. For we too could ask the same question: not ‘why this waste’ when it comes to perfume poured on Jesus’ head; no instead, we ask ‘why this waste’ when it comes to us and Jesus paying for us. The people in that room had an excuse. They had not seen Jesus die on Good Friday and rise on Easter. But, through God’s word, we have. And yet our great sin is that we so easily forget the price that Jesus paid. And we show it by going out and doing the very sins that Jesus paid to free us from. And so we lie, we cheat, we steal, we lust, we hate. Look at this woman for she saw a Savior’s love that filled her with awe and appreciation enough to break this jar and pour out this perfume on his head. And her Savior’s death on the cross wasn’t just enough to pay for her sins. That price was big enough to pay the world’s sins. That means your sins and my sins too.

Why this waste? From every true and realistic point of view the price that Jesus paid for us was a waste. But Jesus did it anyway, making it valid, true, and full of worth. And so, we might start out asking, ‘why this waste?’ But this morning we end up asking, ‘why this act of worship?’ It was not enough for her to use cheap perfume to prepare for Jesus’ burial. And it was not enough to use a little perfume. She gave Jesus her best in worship purely out of thanks. And the same is true for us. Today Christians give their best to their Savior purely out of thanks.

Now, for the time that remains here this morning, please let me give you two examples of what this looks like. The first is an example of what giving our best does not look like. Years ago there was a grandma. She had a piano in her house. Her children and their children had learned to play the piano on that piano. But now some keys would not depress and some strings were broken. She called Goodwill to see if they would come over and take it. They told her that unless it was in good, working condition, they would not take it. So what did she do? She called her sons and had them come over, put the piano in the back of the truck and then dump it off over at church. That, my dear friends in Christ, is junk for Jesus. That is not our best.

The second example is just the opposite. In my last congregation we wanted to have a processional cross. The processional cross is what we use at Palm Sunday and Good Friday. It is a way of picturing our Savior, who he is and what he has done for us. So I asked one of my elders to look into getting us a processional cross. In the worship books it gave this description: you could take the Christmas tree, and cut it up and then strap together two branches, making a processional cross. Months later, he showed up with this large, beautiful cross I had never seen before made of oak. And he told me, “Pastor, I just couldn’t do it. I couldn’t tie together two branches and pretend that that was worthy of our Lord. I wanted to give my best.” And so he did. And it still stands there in that church as an example of giving our best to our Savior Jesus, purely out of thanks.

I use both of these as examples for each of you. Each of you has gifts, skill, talents and abilities that God has given to you. And like this woman, we give our best to Jesus to worship him and thank him.

And so, we start out asking, “why this waste?” Why would Jesus waste his life to pay for my sins? And when we see his great and undeserved love for us we begin to ask a different question: “why this worship?” We give our best to Jesus purely out of thanks to him. Amen.