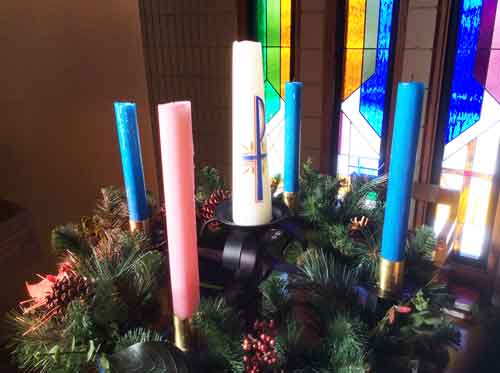 Praise God For His Greatness

How do you know if someone is “great?” 300 years before Jesus was born there was a man named, Alexander. And he was great because he fought many battles and never lost one of them. And he conquered the then-known world within his own lifetime. Right before Jesus was born, Herod was the king of Judea. And he was called great because he built up the temple and made it pretty. In the words we look at this morning, Mary can’t help from proclaiming how great her God is. By this time the angel has told her that she will give birth to the Christ-child. And she goes to visit her cousin Elizabeth. And when she sees her cousin, the baby inside of Elizabeth leaps for joy. Then Mary speaks this beautiful poem, which Christians very quickly set to music and made a song. In Luke 1 we read: “46 And Mary said: My soul praises the greatness of the Lord, 47 and my spirit rejoices in God my Savior, 48 because he has looked with favor on the humble condition of his servant.” (Luke 1:46–48 CSB17)

Mary praises God for his greatness. But why? Why does she praise God for his greatness? What is that makes God so great? Our God is great because he lifts up the lowly. And that makes us ask a question: What does it mean to be lowly? In what was was Mary lowly? First, Mary was lowly because she was a sinner. Notice how she says that she rejoices in God my Savior.1You don’t need a Savior from a bad hair day. You need a Savior from sin.

This is a powerful reminder for us too. The biggest problem you have this morning is not the test you took at school, nor the concerts you practiced for, nor the extra work at the end of the year, nor any of the other stresses that come with this time of the year. The biggest problem is that you are not able to not sin. Every day you get up in the morning and think what you should not. And at the end of the day you have to go to your Father in heaven with a list sins you thought, said, and even did—and those are just the ones you remember.

How lowly we are. But look what we learn from Mary. We too praise God for his greatness. He is great because he lifts up the lowly. Mary praises the God that she will give birth to and hold in her arms because he will be what she is not. He is holy. As she says, “48 Surely, from now on all generations will call me blessed, 49 because the Mighty One has done great things for me, and his name is holy.” (Luke 1:48–49 CSB17) He is holy. And his holiness covers the lowliness of our sin.

But my dear friends, there is another way in which we are lowly. And Mary speaks about this too: “50 His mercy is from generation to generation on those who fear him. 51 He has done a mighty deed with his arm; he has scattered the proud because of the thoughts of their hearts; 52 he has toppled the mighty from their thrones and exalted the lowly. 53 He has satisfied the hungry with good things and sent the rich away empty.” (Luke 1:50–53 CSB17)

In these words we see how lowly we are in that we are humans. Humans are limited creatures. We depend completely on God for our health. We depend completely on God for our wealth. And this too is a reminder of how easy it is to fall into sin by forgetting how frail, limited and weak we are simply because we are humans. Years ago there was a big snow storm in PA. And the power went out. We couldn’t get out of the drive way. We had enough food. And we had a wood-burner stove in the basement. So we all gathered downstairs around the fire eating cold, dry food waiting to be plowed out and for the power to be turned back on. The first day was ok. But after you get past the second day you realize just how dependent you are on the power grid. That fact is so easy to forget. It’s so easy to forget how lowly and limited we are and then take the next step of concluding that we really don’t need God. And we show it by simply forgetting him.

Mary did not forget this fact. She realized that we are lowly simply because we are humans. And she praises God for his greatness in lifting us up. But how he lifts us up is so wondrous. Jesus lifts us up by becoming one of us. In other words, he lifts us up by taking on our frail flesh and living our lowly lives. And he does this in our place, to win forgiveness for all the times we forgot how frail we actually are.

So, my dear friends in Christ, praise God for his greatness. He shows his greatness by lifting up the lowly. But in these remaining words he shows his greatness in a different way: “54 He has helped his servant Israel, remembering his mercy 55 to Abraham and his descendants forever, just as he spoke to our ancestors.” (Luke 1:54–55 CSB17)

Our Triune God is so great because he lifts up the lowly. But he is also so great because he remembers his mercy. The Lord had made promises to people in the Old Testament. He did not need to. But he did so anyway, purely out of his love for them and his pity on them. This sort of love that reaches out and loves people because they are so un-lovable and so un-able to earn your love is what we call ‘mercy.’2 That is the sort of love he showed to Abraham and the rest of the people in the Old Testament. That is the sort of love he showed to Mary. And that is the sort of love he shows to us today. It’s a reminder that it’s all to easy to forget why we give presents at all as Christians. If you watch TV or watch movies what you learn about presents at Christmas time is that you get gifts because you have been good enough. But what’s the problem? Every child knows that he or she has not been good enough. Every child has a year of fighting with brothers or sisters and not obeying their parents. Every child has this but yet anyway gets gifts at Christmas. And the reason we received these gifts at Christmas and why we give these gifts at Christmas is to remind us what Mary realized here. The Lord remembers his mercy. He showers this mercy on a world of people who did not deserve it. We give gifts as Christians every year to remind ourselves of God’s mercy and to teach that mercy to our children.