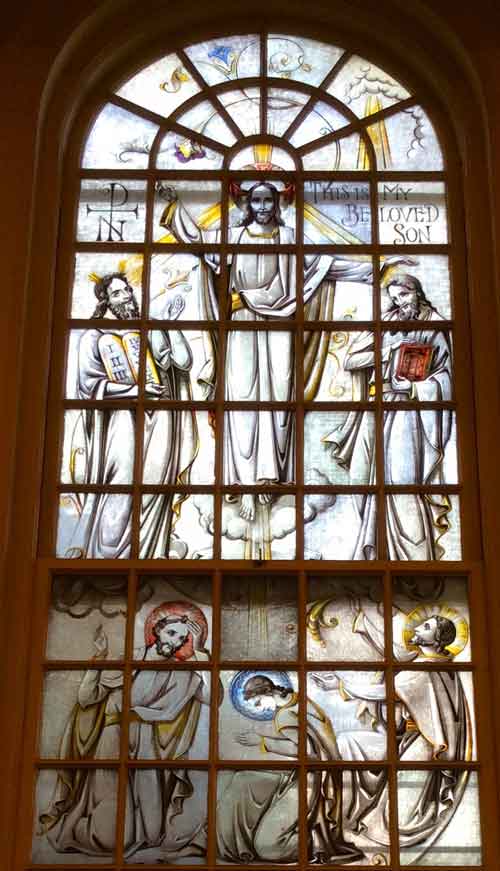 Pastor Steve Bauer
People Are There For You (Transfiguration)

People Are There For You

Where would I have been? For many years when I was growing up, we used to take family vacations to National parks. And what everybody does in National Parks is take hikes. And every year, if you could stay on a busy trail long enough, you’d see parents who tried to do too much. They go out five miles on a hike, but then what do they have to do? They have to carry their children back on their shoulders because their little legs couldn’t travel that far. But where would those children be without their parents to carry them? It’s a wonderful fact that God places people in our lives who are there for us. In our words this morning from Matthew 17, we see how true it is that God provides people who are there for other people. We read: “1 After six days Jesus took with him Peter, James and John the brother of James, and led them up a high mountain by themselves. 2 There he was transfigured before them. His face shone like the sun, and his clothes became as white as the light. 3 Just then there appeared before them Moses and Elijah, talking with Jesus. 4 Peter said to Jesus, “Lord, it is good for us to be here. If you wish, I will put up three shelters—one for you, one for Moses and one for Elijah.”” (Matthew 17:1–4 NIV11-GKE)

God places people to be there for other people. But notice here in these words who it is who is there for whom? In these words Moses and Elijah are there for Jesus. They are there to encourage him as takes on the last and most important leg of his journey to the cross. Here is where it is good for us to remember that doctrine we learned about in our catechism days, called Jesus’ active obedience. Jesus in his active obedience keeps all the commandments we cannot. Jesus in his active obedience is tempted in every way just as we are but does not sin. And not only does he do this, he grows as a human being, so that in every age and every stage of his life, he keeps God’s commands for us, in our place. So here are Moses and Elijah commending, complimenting and even worshipping Jesus. You can just see Moses there saying, “So long ago, you commanded me to command a rock to pour forth water from a rock as a sign of your mercy, but instead, I made that preaching of gospel a preaching of law. I am not worthy, Jesus, but you are.” You can just see Elijah there saying, “So long ago Jezebel wrote me a note saying that by this time tomorrow you”ll be as dead as all the prophets of Baal who died in one day. And, instead of trusting in you, I ran as far and as fast as I could. I am not worthy, Jesus, but you are.”

Jesus received their compliments and commendations. He was built up by them. But here is where we see our sin. God provides people who are there for us. And what do our Christian family and friends do for us? Out of love for us, they correct us. And when they correct us, we face this real temptation to get angry. But just as real as that temptation is, there’s the opposite temptation. There is the temptation to disregard the compliments and commendations too. Years and years ago when I was in school, I had an english teacher who said that he went to a band concert. And after the concert was done, he went up to a young woman who had played her instrument very well. And he said to the young woman, “well done.” And, in response, she said, “It was nothing.” He got angry and said, “when I say you did well, I meant it. I know what I’m talking about.’” How much worse is it when we recognize that God is the one who gives to us our gifts.

And so, there is a temptation to sin by refusing corrections from from friends and also from refusing compliments from friends too. But look what our good and gracious God does. He provides people—people who are there for us. When we sin, especially when we sin like this, we need forgiveness. And through our Christians friends and family he forgives us. Yes, they remind us that our sins are forgiven. But they do even more, they actually forgive our sins as if God had forgiven them himself. In John 20, Jesus says: “If you forgive anyone’s sins, their sins are forgiven; if you do not forgive them, they are not forgiven.”” (John 20:23 NIV11-GKE) And that’s how our good and gracious God provides people who are there for us. Yes, they correct and commend us. But even better than all of this, they forgive us. They point us to the Jesus we find in these words who was uplifted and commended by his friends, Moses and Elijah. But unlike us, instead of refusing their true commendations, he was encouraged by them.

Your good and gracious Lord provides people who are there for you. But as these words travel on, there is another way in which God provides people who are there for you: “5 While he was still speaking, a bright cloud covered them, and a voice from the cloud said, “This is my Son, whom I love; with him I am well pleased. Listen to him!” 6 When the disciples heard this, they fell facedown to the ground, terrified. 7 But Jesus came and touched them. “Get up,” he said. “Don’t be afraid.” 8 When they looked up, they saw no one except Jesus. 9 As they were coming down the mountain, Jesus instructed them, “Don’t tell anyone what you have seen, until the Son of Man has been raised from the dead.”” (Matthew 17:5–9 NIV11-GKE)

Our friends forgive us. But look who the person is that God’s word focuses in on. A voice came from heaven. And that voice was God, the Father. And so our friends forgive us. But notice what the Father does. He reminds us. He speaks from the cloud and says that Jesus is his beloved Son. And because he is his beloved son, he urgently asks us to listen to him. Peter, James and John were not able to do what the Father asked of them. Even though Jesus had spoken about what would happen to him—how he would suffer, be crucified and die, nevertheless, they did not listen to him. And so, they were completely unprepared for all the sad tragedies that were poured out on Jesus.

And can we say that we are any different? The Father says, “listen.” But how many sermons have we drifted in an out of focus in? How many times have we read God’s word as if it were a task to get done instead of God speaking to us by his Holy Spirit?

And that’s why it’s good news to learn that God provides people who are there for us. And in these words who is the one who is there for us? It’s the Father himself. And what does he do? He reminds us. All the truths in his word that lay dusty and neglected, he goes out of his way to remind us. What kind of Savior we have—one who was rightly and properly complimented and instead of refusing, Jesus received that compliment. And he did so in our place. That is what the Father reminds us of. And that is what he then urges us to listen to and gives us the ability to hear.

And so, my dear friends in Christ, rejoice. Just as Moses and Elijah were there for Jesus, so God has placed Christian friends in your life for you. But unlike with Jesus, the greatest gift they give you is the forgiveness that Jesus won for you. Your friends forgive you. And rejoice. For your Father reminds you again and again what kind of Son he has and the sort of Savior you worship. Amen.