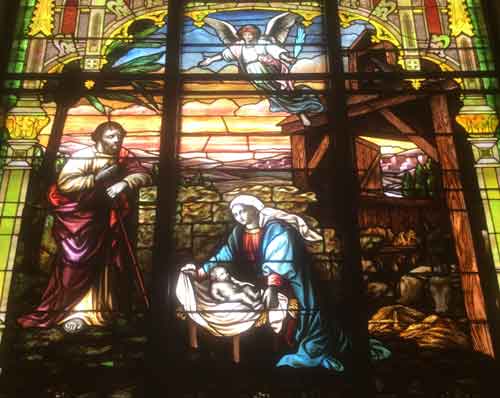 Jesus Is the Redeemer of Time

Time was my tormentor. When I was growing up we used to visit uncle Ferd and Aunt Leoma. And what I remember most about their house was time. To be more specific, they had this monster-sized Grandfather clock. It would ring so loudly on the quarter hour that everyone had to stop and wait for it to stop before they could continue talking. And at night it was even worse. All us kids had to sleep on the carpet floor in the living room. And every hour, on the hour, the ground would shake and your ears would cry out in pain when it sounded the hour. Time was my tormentor. But I’m not alone. In a different way all throughout all the ages, time has been our tormentor. In John 1, we read: “1 In the beginning was the Word, and the Word was with God, and the Word was God. 2 He was with God in the beginning. 3 Through him all things were made; without him nothing was made that has been made.” (John 1:1–3 NIV11-GKE)

John starts here in a very fascinating place. He lets us know that at the beginning there was this perfect communication—the word. And this word was more than just words and thoughts. It was God himself. Now then, remember what happened in the Garden of Eden. In that garden everything was pure and perfect. But then that serpentine Satan came along and tempted Adam and Eve to sin. And they listened. From that time on time itself was corrupted. Time became the world’s tormentor. God stood apart from and outside that time. Now, if we put ourselves in God’s shoes for even a moment, it might have been tempting to stay away from this world and the corrupted time in it. But, instead, the opposite happens. We read: “4 In him was life, and that life was the light of all mankind. 5 The light shines in the darkness, and the darkness has not overcome it. 6 There was a man sent from God whose name was John. 7 He came as a witness to testify concerning that light, so that through him all might believe. 8 He himself was not the light; he came only as a witness to the light. 9 The true light that gives light to everyone was coming into the world. 10 He was in the world, and though the world was made through him, the world did not recognize him. 11 He came to that which was his own, but his own did not receive him.” (John 1:4–11 NIV11-GKE)

In the same way we might want to avoid a long line at the supermarket or the shopping center because of the extreme waste of time waiting, there would have been a temptation to not come down to earth. But that’s what Jesus did. Jesus came to his own. But his own did not receive him. Instead, they rejected him. For about three decades Jesus was growing up as a Jewish carpenter. And the first ones to not believe that he was the Son of God was his own brothers—his own family. He came to his own people, the Jews. And for the most part they liked his fancy miracles, but wanted nothing to do with his teaching. And think of the Pharisees and teachers of the Law who demanded that he prove that he was the Christ. And then they plotted to put him to death. And Jesus endured this rejection over decades!

But, as you’re traveling through the bible, looking for those who did not receive him and instead, rejected him, don’t forget to look at your own heart. Each of us has a sinful nature. And time itself testifies against us. For when our Savior asks us to serve, that sinful voice inside of us says, “not your time, but mine”. Such selfishness we show. But there’s also laziness. We do what we are called to do. But we it with slow hands and a complaining heart. And we waste Jesus’ time by wasting the time of others around us. And that waste of time goes on every day, month and year of our lives. So the people in Jesus’ day aren’t the only ones who have not received Jesus and instead rejected him. Just as much as time torments us, we use time to torment Jesus. Who will lift this weight of wasted years from our shoulders and hearts? Listen to what John tells us: “12 Yet to all who did receive him, to those who believed in his name, he gave the right to become children of God— 13 children born not of natural descent, nor of human decision or a husband’s will, but born of God.” (John 1:12–13 NIV11-GKE)

Jesus is the Redeemer of time itself. And in these words we see how. Jesus takes on human flesh and blood and willingly waits. Oh, how much he must have yearned to be grown up preaching God’s word as only the Divine Word can do. But, instead, he waits. And he does so willingly and wondrously. And my brothers and sisters in Christ this is good news. For, where we wait restlessly and waste Jesus’ time. He waited willingly in your place and in mine. And that patience payed off. For at just the right time he allowed himself to die for the sins of the entire world and make a payment to take away your sin. The result is wondrous and joyous. Your sins of willingly wasting God’s gift of time to you are forgiven by Jesus’ patience and his payment. And all of this is ours through this gift of faith. But there’s more. John writes: “14 The Word became flesh and made his dwelling among us. We have seen his glory, the glory of the one and only Son, who came from the Father, full of grace and truth. 15 (John testified concerning him. He cried out, saying, “This is the one I spoke about when I said, ‘He who comes after me has surpassed me because he was before me.’ ”) 16 Out of his fullness we have all received grace in place of grace already given. 17 For the law was given through Moses; grace and truth came through Jesus Christ. 18 No one has ever seen God, but the one and only Son, who is himself God and is in closest relationship with the Father, has made him known.” (John 1:14–18 NIV11-GKE)

Jesus is the redeemer of time through the gift of time redeemed. But he’s also our redeemer through the gift of time restored. Here in these words we see the result of God’s grace. The time that was our tormentor now is our ally. One of the great paralyzing parts of being a human is that we fail, feel horrible about it and then are terrified of moving ahead in the future. If you’ve wasted your time and you are there sitting in the classroom or boardroom and you are completely unprepared for the test or report you are called to do, you can be paralyzed with fear for the future. If you’ve said something mean to someone and, despite the fact that you have apologized to that person and repented to God, nevertheless, time is your tormentor. For time reminds that other person what you did. Jesus took on human flesh and blood to redeem you of the torture and torment that time brings you. And he accomplished that through his patience for you and payment for you.

You are forgiven. From that fact flows so much freedom. We do not have to live in the future anymore. We can boldly go ou there into the world and use the time God has given us even if we might make mistakes and even if we might commit sins. We do not need to live in terror of making a bad choice and as a result we make no choice. No, Jesus has redeemed us from the terror, torment, and torture of time. Time now is a gracious gift to us. So, my dear friends in Christ, live in that freedom. Amen.