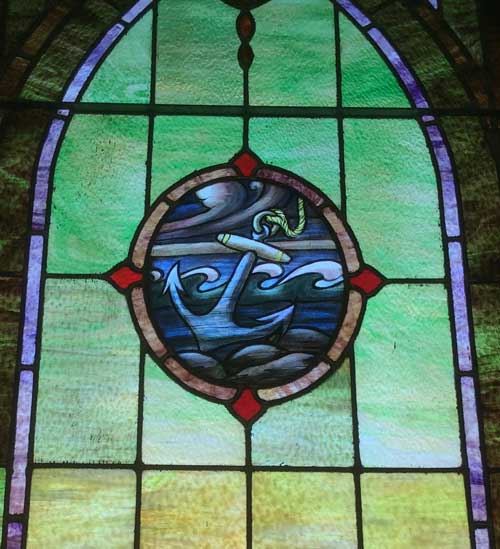 Pastor Steve Bauer
How Do I Get Past The Past? (Easter 6)

How Can I Get Past The Past?

There are some events you don’t forget. Years ago, when I was a child, even though my Dad told me not to, I touched an electric fence. If I had to go back and use one word to describe what it was like to touch an electric fence, the word that would fit the best is: trauma. Now, notice, I did not say the word, “drama.” That event was dramatic. It was dramatic to hear me shout in pain and see me sit on the ground. But that’s not the word. The word is: trauma. Trauma is this immense wounding that is done to your body and soul. And it’s such a catastrophic wounding that you can’t really grasp how much it affected you. But even worse than that, for months afterwards, whenever I was riding my bike and saw a fence out of the corner of my eye, I instinctively jerked my bike away from that side of the road. In my own way, I was not able to get past the past. All of that I mention this morning so that you would realize that, if I went through a little trauma this morning, the people we meet in God’s word here in Jeremiah 29 went through so very much more trauma than I did. In Jeremiah 29, in verse 4, we read: “This is what the Lord Almighty, the God of Israel, says to all those I carried into exile from Jerusalem to Babylon:” (Jeremiah 29:4 NIV11-GKE)

In 586 B.C. Jerusalem was conquered by the Babylonians. There were many people who were killed. There were many who saw their loved ones killed. They were enslaved. They were deported from their own land and exiled to a land full of godless pagans. There is no other word for what they experienced than trauma. And as we begin these words, in a very real way, they were not able to get past their past.

What God’s word brings to focus in our eyes is that there were believers in the the Old Testament who were traumatized. And the same is true today. There are members of our churches—even our own congregation, who have been traumatized. Terrors and tragedies that should never happen to anyone, happened to them. And they, just like these believers in the Old Testament, out of such pain, ask a very real question: “how can I get past the past?”

There are believers who are traumatized, who are in our churches. And the very real temptation we face today is to not realize and recognize that there are people in our churches that are dealing with trauma and the effects of trauma in their every day lives. There is this temptation to not talk about trauma at all. I face this temptation. I read this part of history and think to myself: “it would be so much easier to just pretend it didn’t exist.’” It’s embarrassing to talk about trauma. And after all, won’t I drive away visitors and guests if I share these parts of God’s word?

The truth, however, is that I’m not fooling anyone. There are people who have been traumatized in our churches. You’re not fooling them. And you’re also not fooling guests to our church. The people who visit our church know that there is trauma out there in the world. And many of them know this because they have faced it in their own lives. And so, there are believers that are in our churches that live with trauma. But the Lord has more to say to us: “5 “Build houses and settle down; plant gardens and eat what they produce. 6 Marry and have sons and daughters; find wives for your sons and give your daughters in marriage, so that they too may have sons and daughters. Increase in number there; do not decrease. 7 Also, seek the peace and prosperity of the city to which I have carried you into exile. Pray to the Lord for it, because if it prospers, you too will prosper.” 8 Yes, this is what the Lord Almighty, the God of Israel, says: “Do not let the prophets and diviners among you deceive you. Do not listen to the dreams you encourage them to have. 9 They are prophesying lies to you in my name. I have not sent them,” declares the Lord.” (Jeremiah 29:5–9 NIV11-GKE)

There are those who have been traumatized who are in the church. But notice the point here that the Lord makes. There are also those who have been traumatized by the church. So here’s the situation in the 500’s B.C. They are slaves and exiles in Babylon. They want to be back in Jerusalem. They don’t want to hear the tough truths. So, to fill the void, there were false prophets, dreamers, and diviners who committed two horrible sins: first, they refused to tell these Old Testament believers the tough truths that the Lord was speaking to them. Second, Instead of speaking God’s truth, they told the people that their own dreams were what God planned and intended to do. For, when trauma strikes, it’s always so easy to not face it and dream it away.

And the same is true today. It’s not just true that there are believers who have been traumatized who are in the church. There are also people who have been traumatized by the church. And it happens in the same two stages. The first way is that churches avoid the tough truths in the bible. And the second way is that they tell the people that their own dreams have to be God’s will. In fact, if you were to do a google search for these words here in Jeremiah, you could find an amazing amount of sermons that will preach to you that if you plan it, God has to prosper it.

There was a man who grew up in the church. But he never heard the tough truths of scripture. And so, on one Easter after another he heard that Jesus was victorious. But he never heard what Jesus was actually victorious over. He ended up living with his girlfriend outside of marriage. They had a child. But she refused to marry him. And she kept the child away from him. He went back to his pastor in the church he grew up in and told him, “why didn’t you tell me that adultery was a sin?’” Sad to say, just like in Jeremiah’s time, there are those who are traumatized by the church because the pastors in the church sidestep the tough truths of scripture. So my dear friends in Christ, what does the Lord do with all of this? What will he do for those who are traumatized who are in the church and those who are traumatized by the church?: “10 This is what the Lord says: “When seventy years are completed for Babylon, I will come to you and fulfill my good promise to bring you back to this place. 11 For I know the plans I have for you,” declares the Lord, “plans to prosper you and not to harm you, plans to give you hope and a future. 12 Then you will call on me and come and pray to me, and I will listen to you. 13 You will seek me and find me when you seek me with all your heart. 14 I will be found by you,” declares the Lord, “and will bring you back from captivity. I will gather you from all the nations and places where I have banished you,” declares the Lord, “and will bring you back to the place from which I carried you into exile.”” (Jeremiah 29:10–14 NIV11-GKE)

The Lord promises. He promises to give these traumatized people both a real hope and a real future. That hope starts in Babylon and leads all the way to the empty grave on Easter Sunday. For the Lord promised that there would be a Savior and Messiah born in the promised land. That Messiah was born. He lived for us. He died for us. He rose for us. And that fact gives hope. It preached to them that out of the trauma they faced the temptation to dream away the pain instead of facing it. And the Lord forgave that sin. But even more, he comforted them in their pain. That is a real hope.

The Lord promises a real hope. But he also promises a real future. When I read these words in Jeremiah, I can’t help but think of the man who wrote two of our hymns this morning. His name is Paul Gerhardt. He was a man who was a pastor during a time of war and plague. He buried maybe as much as half of his congregation within a few short years. Four of his children died. Then his wife died. Then, he was kicked out of his church because he was willing to teach the tough truths of God’s word. And finally, we are told, he ended his years ministering to a “cold an unsympathetic people.” And yet, he could write and sing hymns like the one we just sang, full of confidence, hope and joy. He could do this because he knew he had a God who forgave his past and promised him a future. And the Lord dealt with his trauma day by day until he finally brought him home to heaven.

Yes, there are those who are traumatized in our churches. And there are those who might have even been traumatized by our chuches sometimes. And that drives us to say, “how can I get past the past?” What great promises our Lord speaks to us, just as he spoke to his people of old! He promises us a real hope in sins forgiven. And he promises us a real future, so that whether our lives have small bumps along the way or instead, have terrible tragedies—like those in Jeremiah’s time; like Paul Gerhardt, we find strength, comfort, and peace in knowing our Lord Jesus is in control of all of time and all the events in it. And that’s how he helps us get past the past. Amen.