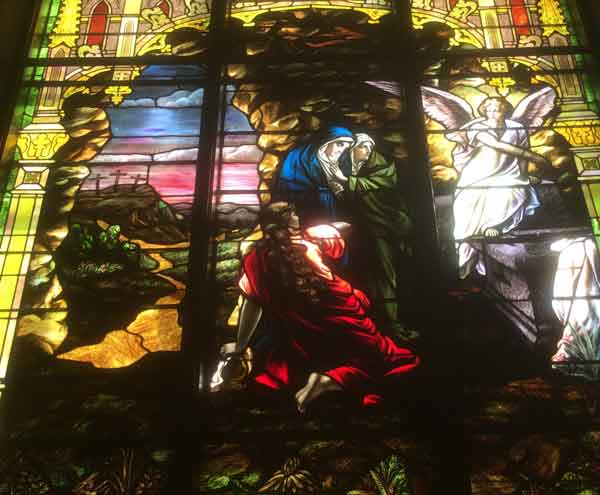 It is permissible to be beaten, but not surprised. Many years ago the French emperor, Napoleon, said that. You see, if your army is about to be beaten on the field of battle, you can withdraw a large chunk of your troops. And they can fight on another day. But if you are surprised, those are the times when you can lose your entire army. When you read any of the gospels, you very quickly realize that Jesus knows that he will die. But everyone else does not. So he goes out of his way to prepare them and teach them. And the women we meet here in the darkness of Easter morning were some of the few who had a decent grasp on the fact that Jesus would die and that he did die. In Mark 16, we read: “1 When the Sabbath was over, Mary Magdalene, Mary the mother of James, and Salome bought spices so that they might go to anoint Jesus’ body. 2 Very early on the first day of the week, just after sunrise, they were on their way to the tomb 3 and they asked each other, “Who will roll the stone away from the entrance of the tomb?”” (Mark 16:1–3 NIV11-GKE)

It is permissible to be beaten, but not surprised. These women had more than two years of teaching to be prepared for the fact that Jesus would die. But when the time came for Jesus to die, how could they really ever be fully prepared? And, in the midst of dealing with Jesus’ death, they aren’t even able to focus on it as much as they would like because they have to deal with a funeral. They buy spices to prepare Jesus body in his tomb on Friday and then now, on Sunday they can finally use them. One of the shocking and frustrating situations I’ve had to deal with is funerals. A person loses their loved one through death. And more than anything the family members just simply want time to deal with the death. But instead, they have to prepare and attend a funeral service. It doesn’t seem fair. But these women went through the same situation as we do today. But if they had a problem dealing with Jesus’ shocking and surprising death, they were even more unprepared for what followed: “4 But when they looked up, they saw that the stone, which was very large, had been rolled away. 5 As they entered the tomb, they saw a young man dressed in a white robe sitting on the right side, and they were alarmed. 6 “Don’t be alarmed,” he said. “You are looking for Jesus the Nazarene, who was crucified. He has risen! He is not here. See the place where they laid him. 7 But go, tell his disciples and Peter, ‘He is going ahead of you into Galilee. There you will see him, just as he told you.’ ”” (Mark 16:4–7 NIV11-GKE)

If they were shocked and surprised at having to deal with Jesus’ death then they were even more shocked and surprised in having to deal with Jesus’ life. The angel in the tomb tells them simple, plain and eloquent words. Jesus is raised. He is not here. This would be the part where they’re supposed to take out their “alleluia” banners and wave them around while they sing, “I know that my Redeemer lives.” But they don’t. Instead, this is what happens: “Trembling and bewildered, the women went out and fled from the tomb. They said nothing to anyone, because they were afraid.” (Mark 16:8 NIV11-GKE)

He gave them time—both to deal with his death and with his life. And today he does the same for us. Every year our Savior gives us this 40 days of lent to prepare for his death, so that by the time Good Friday arrives, we’re ready. But what he also does is that he gives us time to prepare for his life. In the first congregation I served in we had an Easter Sunrise service like this one. And after it was done there was a lady who came and spoke with me. She told me that she was frustrated and angry with me because she expected to come to church and sing “alleluia” instead of diving back into darkness. And she said, “You took Easter away from me.” I was really shocked by what she had said. But what it showed me is that she had never really grappled with the words we have in front of us today. These poor women were not ready. They were not ready for Jesus’ death and they were not ready for his life. What they needed was time. And that’s what our Lord and Savior gave them. And that’s what the Easter vigil gives us—time.

For many centuries what would happen is that Christians would gather around midnight on Saturday night and then read God’s word, hear sermons, have bible studies and sing hymns to prepare themselves not as much for Jesus’ death, but instead, for Jesus life. And then, when the sun came up in the morning they rejoiced in their Savior’s resurrection and then went home and got some sleep. They needed time to adjust to Jesus’ life. And so they set aside the time. Do realize that if Christians saw what we do on Easter Sunday they would think that it’s strange. Where’s the time to adjust from Jesus’ death to his life? We slowly walk through lent and slowly work through Jesus’ death on Good Friday, and then what do we do? With no time for transition we suddenly show up and shout “alleluia” at each other. That would have been weird for the ancient Christians.

And so, out of love for us, Jesus gives us time—time to deal with his death and time to deal with his life. And this is not just important to speak about on Easter. It’s also important to speak about on our last day. Sunday after Sunday, year after year, y0u have the great privilege to hear, study and grow in God’s word. And through this what does Jesus do? He makes us ready for our own death. Because Jesus died, we are able to look at our own death with faith and confidence even amidst our own fear. But Jesus also gives us time to deal with our life. They had the privilege to see a resurrected Savior. And that showed them a glimpse of what their resurrected life would be. And through God’s word we have the same privilige.