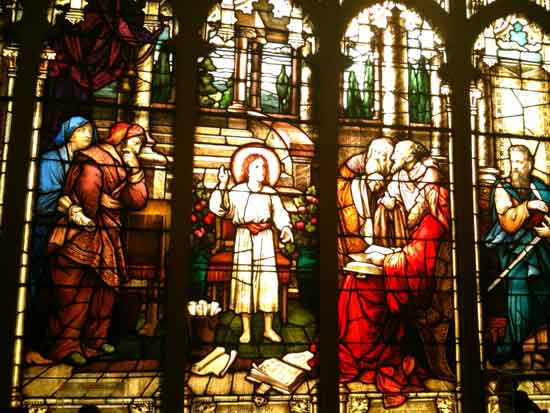 Some lessons are shocking. Years and years ago, we went on vacation to New York. We were getting onto the Subway. And, like any of you know, if you have children, if you have Children, you also have so many other things to carry with you. And so, you have to picture me throwing one thing after another into the subway car before the door closed. And you also have to picture our little girl there on outside the subway car—all by herself. So, I worked hard and got all the stuff into the car. And the door began to close. But there was our little girl outside. And I rushed to put my foot in the door, but I was way too far away. And I knew it. Thankfully, there was a dad who saw my problem. And he put his foot in the door ahead of me. And all of us ended up on the subway car together. Some lessons are shocking. But the lesson I learned wasn’t nearly as shocking as the lesson Mary and Joseph learned: “41 Every year his parents traveled to Jerusalem for the Passover Festival. 42 When he was twelve years old, they went up according to the custom of the festival. 43 After those days were over, as they were returning, the boy Jesus stayed behind in Jerusalem, but his parents did not know it. 44 Assuming he was in the traveling party, they went a day’s journey. Then they began looking for him among their relatives and friends. 45 When they did not find him, they returned to Jerusalem to search for him.” (Luke 2:41–45 CSB17)

Josephs and Mary and their entire family went up to Jerusalem for the Passover. And they thought that after the Passover was over, they were all going back home. But when all of the rest of them left and went home, Luke here tells us that Jesus remained. And what follows is fear, terror and shock. Joseph and Mary get about a day’s journey away from Jerusalem and they ask around and realize that Jesus isn’t there. What a grievous and horrible sin to commit. It was their God-given role to watch over the Christ-child. And they forgot him. So they travel back to Jerusalem. And they search for him for three days! Can you imagine how frustrated and fearful they were? With that in mind we can begin to understand what happens in the words that follow: “46 After three days, they found him in the temple sitting among the teachers, listening to them and asking them questions. 47 And all those who heard him were astounded at his understanding and his answers.” (Luke 2:46–47 CSB17)

Three days later they find him. And where do they find him? They find him in the temple. And what is he doing? He is listening to the teachers of teachers and professors of professors. And even more than that he is asking them one pointed question after another. Finally then, they make their way up to the front of the group and they ask their son the question they needed to ask: “When his parents saw him, they were astonished, and his mother said to him, “Son, why have you treated us like this? Your father and I have been anxiously searching for you.”” (Luke 2:48 CSB17)

There you are as parents. You are full of fear. You are full of frustration. You need answers as to why your son didn’t obey you. And the answer Jesus gives is amazing. We read: “49 “Why were you searching for me?” he asked them. “Didn’t you know that it was necessary for me to be in my Father’s house?” 50 But they did not understand what he said to them.” (Luke 2:49–50 CSB17)

He tells them that he absolutely had to be where he was.1 And there’s a translation issue here. And you’ll see this in the footnote in any decent english version. In these words Jesus says that he needed to be in his Father’s……..2 And context has to fill in the proper word. Is it his Father’s rooms? His Father’s work? His Father’s interests? The best answer is probably all of these. This is Jesus’ way of letting his parent’s know that he wasn’t the one in the wrong. They were. He had to remain there in Jerusalem because Jesus’ interests were the Father’s interests.

And just what exactly was their Father in heaven interested in? He was interested in them growing by asking. Notice the huge contrast we see in these words. Mary and Joseph were convinced that what was most important was that they rush back home and get back to work. But Jesus deliberately stays in Jerusalem to teach them that, no, that was not correct. What was absolutely necessary is that he grow by asking. And Jesus had to be there in that temple asking questions for one simple reason: Because we fail so miserably at it. Our Father wants us to ask questions. But it is so easy to not do this. It is so easy to rush out of church after our service is done and not stay to ask questions in our bible study class. It is so easy to sit down at home and read our bibles so that we can check that off of our mental list of things to do instead of reading in such a way that we ask questions. He wants us to listen to sermons like Jesus did: like one who was asking questions in his soul and mind all the time he was hearing the sermons. That’s what our Father wants—that’s what he is interested in. But that’s exactly and precisely what we fail at. And that’s why it was so absolutely necessary that Jesus not go home—why he would stay and ask questions. We needed a Savior who would ask questions when we, in our sin, do not want to. We needed a Savior who would ask questions of God’s holy word when we didn’t have the energy to. We need a Savior to ask questions of God’s word when we didn’t even know what to ask. And in this boy of twelve years old that’s exactly what we find.

The Father is interested in us growing through asking. But our Father is interested in much more. We read: “51 Then he went down with them and came to Nazareth and was obedient to them. His mother kept all these things in her heart. 52 And Jesus increased in wisdom and stature, and in favor with God and with people.” (Luke 2:51–52 CSB17)

The Father is interested in us growing through asking. But he is also interested in us growing through obeying. The other huge area that we find a temptation to sin is that our Father in heaven asks us to station ourselves under other people in our lives—not because they are better than we are, but this is what he is interested in. This is his plan for us. So parishioners obey pastors, wives obey husbands, children obey parents, students obey teachers, and workers obey bosses. The problem is that there are times we don’t want to do this. And this is understandable when the person over us asks us to sin. Indeed, we must obey God rather than men. But most of the time, we get angry with them simply because we want to do what we want, not what they want.

And for this sin too, we need a Savior. We need someone who will not just ask in our place, but also obey in our place. We find that Savior in this twelve year old boy. Jesus was not the one who messed that week. His parents were. Jesus was the one knew what his Father was interested in. Jesus was the one who made his Father’s interests his own need. And we see that here so beautifully in these words. For not only did he ask when we do not, he also obeyed when we so often do not. He humbled himself and went down the mountain and back to Nazareth. And he did this not because his parents were equal to or better than he was. He did this because this is what his Father was interested in.

And so, what the Father was interested in, Jesus was to—perfectly and obediently in our place, so that our failings would be replaced by his faithfulness. And with that amazing fact, the Holy Spirit encourages and gives us a new person to grow in the very areas we fail in. And so, my dear forgiven friends in Christ, ask. When you hear God’s word read, ask. When you read it at home, ask questions. When you come to bible study class, ask questions in your own heart, if not even out loud. And I will do my best to answer those questions. And not just ask. Also obey those whom God has put in your life to lead you. For both of these are what your Father in heaven is interested in. And as you struggle to do these your Father in heaven promises to bless you. Amen.