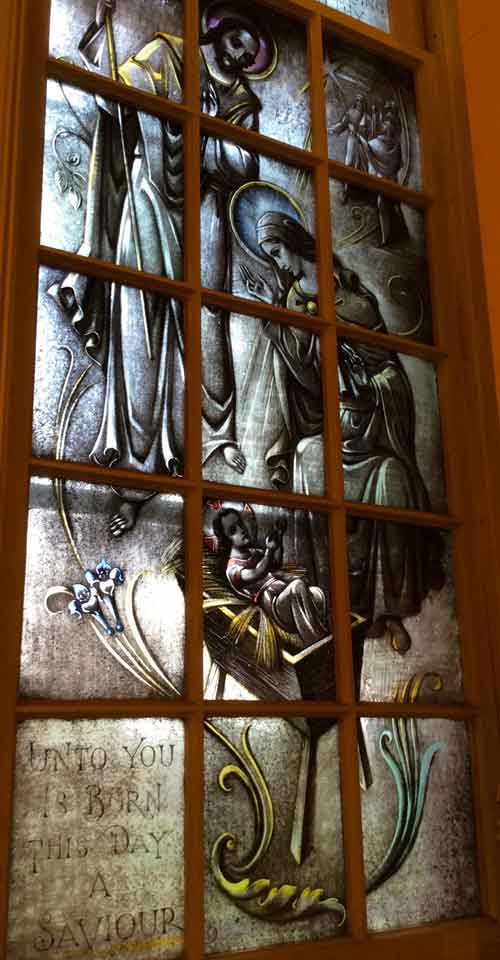 Pastor Steve Bauer
A Child Is Born For Us (Christmas Eve)

A Child Is Born For Us

Old words are hard to understand. Here we come a wassailing among the leaves so green. A well-known Christmas carol starts with those words. You sing it and then you ask yourself at some point: “What is wassailing?” Wassailing is when about 1000 years ago the everyday people would bring a gift to their feudal landLord. And he, in turn, would give them a gift. And that carol is a reminder that there are old words out there that are hard to understand simply because they are so old. This evening we run into the same difficulty. In Isaiah 9, we read these words: “The people walking in darkness have seen a great light; on those living in the land of deep darkness a light has dawned.” (Isaiah 9:2 NIV11-GKE)

The people live in the land of……—Is it “death” or “darkness?”1(Isaiah 9:1 BHS-T)}}
And the word is so old that it’s hard to figure out which context is meant. If the problem is figuring out whether the word means ‘death’ or ‘darkness’, the solution is context. And the context here is Old Testament history. In the Old Testament the Lord asked and then begged his own people, the Jews to worship him and follow him. Instead, they worshipped other gods. Then he threatened them. And still, their attitude didn’t change. Then finally, in 722 B.C. the Lord had the Assyrians come down from the north and conquer and kill the ten northern tribes of Israel. And then so many of those that remained were carried and carted off to the distant ends of the world. And the result is that, where there were towns with the sounds of voices, now there was silence. Where there were towns where there were lights—lamps and torches lit, now there was darkness. For the people who had lived there were either killed or carted away. So if we ask the question: “does the word mean darkness or death” , the answer is that it is the death that brings darkness.

What a strange way to start out a Christmas Eve sermon, isn’t it? And yet, that’s where God’s word precisely leads us to this evening. And it’s a fact that each of us at some point has to deal with. For in every family there are treasured family members who used to be there at Christmas, but now are not. Grandpa used to be there sitting in that chair watching the grandkids open those presents, but now there is silence. Grandma used to be there baking those cookies in the kitchen with her daughter or grandkids. But not anymore. For just as in Isaiah’s day, so also in ours: death brings darkness. Or, to use words we hear in the New Testament: “For the wages of sin is death” (Romans 6:23 NIV11-GKE) And that’s why there can be this strange sadness and guilt, that this time of the year that should be filled with joy and peace instead is filled with darkness and sadness.

My dear friends in Christ, that’s what living in the sinful world that we live in looks like. But thankfully, God’s word doesn’t stay there. We read: “3 You have enlarged the nation and increased their joy; they rejoice before you as people rejoice at the harvest, as warriors rejoice when dividing the plunder. 4 For as in the day of Midian’s defeat, you have shattered the yoke that burdens them, the bar across their shoulders, the rod of their oppressor. 5 Every warrior’s boot used in battle and every garment rolled in blood will be destined for burning, will be fuel for the fire.” (Isaiah 9:3–5 NIV11-GKE)

Death brings darkness. But look where God leads us from there: Light brings joy and peace. Here too God gives us a picture. In the Old Testament there was an enemy of the Israelites called the Midianites. And the Lord chose a leader among the Jews by the name of Gideon.2 Gideon, with thousands, went to war against Midian, with their tens of thousands. But just before he was about to go out to war against them, the Lord told him that he had too many men. With their their thousands of men, the Jewish warriors might conclude that they were the ones who defeated the Midianites, not God. So the Lord then narrowed their numbers down to about 300. And then with 300 men Gideon went out to war and defeated them. And on that day everyone knew that it was not Gideon, nor his men that won the victory. Instead, it was the Lord alone who brought this victory.

That’s the picture. But what is the point? There would be a light that would shine out and bring peace and joy. But the Lord is the one would provide it. If the problem was death that brings darkness, the solution is one that only the Lord can provide. And as the words travel on, we see then what this solution is: “6 For to us a child is born, to us a son is given, and the government will be on his shoulders. And he will be called Wonderful Counselor, Mighty God, Everlasting Father, Prince of Peace. 7 Of the greatness of his government and peace there will be no end. He will reign on David’s throne and over his kingdom, establishing and upholding it with justice and righteousness from that time on and forever.” (Isaiah 9:6–7 NIV11-GKE)

Death brings darkness. And a light will bring joy and peace. So what then is this light? God’s word tells us that a child is born for us. A son is given to us. And this son will also be “Mighty God.”3(Isaiah 9:5 BHS-T)}} What is the solution to death that brings darkness? The solution is a son that will destroy death by dying. And in that he will bring us peace.

And isn’t that an important issue to speak about too at Christmas time? This is a time of the year that should be filled with peace and joy. But instead it’s a time strained with stress. Tests are due. Work has to be done before you go away for Christmas break. There are choir concerts and band concerts. There’s shopping to get done and dinners to plan. And in that stress and strain it’s so easy lash out with words against our loved ones that we wouldn’t say if it were the middle of Summer.

And so, death brings darkness. But Jesus, the light brings peace. For to us a son is born. But notice, my dear friends in Christ, where these words close: “The zeal of the Lord Almighty will accomplish this.” (Isaiah 9:7 NIV11-GKE)

What then is our response to this? Like the shepherds in the open countryside keeping watch over their flocks at night, just like them, we bow down and thank, worship and praise Jesus. For to us a child is born; and to us a son is given. Amen.